New Strategy Center organized on October 10th, along with the West University of Timisoara, the “Security Challenges in the Balkans” conference. The event brings together high ranked representatives of the institutions with responsibilities in the field of foreign affairs and defense, such as Teodor Melescanu, head of the Romanian diplomacy, Leonard Orban, presidential advisor for European affairs and general Nicolae Ciucă, Chief of the General Staff. Speakers representing the United Nations, the diplomatic corps, the institutional or academic environment in Serbia, Croatia, Bosnia and Herzegovina, Albania, Turkey, Great Britain, Italy, France debated in Timisoara regarding the great challenges of the Balkans, what are the EU and NATO policies towards this region which is still vulnerable from a security point of view.

The first panel of the conference, entitled ”Old and new challenges for the Balkans and European security” had the following speakers: 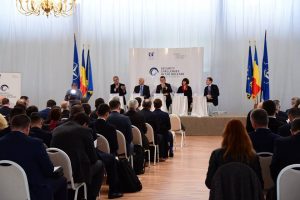 The discussion addressed the new and the old challenges for the Balkans and European security. Mr. Teodor Meleșcanu said that there is a window of opportunity regarding the Balkans for Romania, that although we have to live with the history of the region, we must look into the future and find new means of reconciliation in the area. Preventing a crisis in the Western Balkans remains the key-priority for the United Nations, as Mrs. Simona Niculescu mentioned in the discussion panel. Also, the essence in the process of the reconciliation is the trust that must be built in the citizen-state relation, affirms Marc Berenson. Mr. Gencer Ozcan reiterates the fact that Turkey remains a strong and reliable member of NATO in the region. 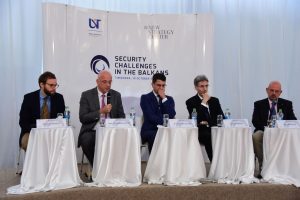 The debate regarding the EU policy in the Balkans covered various aspects such as the capacity of Romania to provide assistance to the EU candidate-countries in the region, as an ”honest-broker”, in the accession process, as Mr. Leonard Orban said. Also, Mr. Iliya Lingorski mentioned the fact that Romania represents the natural point of stability in the Black Sea region and South-East Europe. The German Ambassador to Romania, Mr. Cord Meier-Klodt, considers that the economic integration of the Balkans represents a win-win situation for all the European countries and the pro-European position of Romania is highly-appreciated. Regarding the future of the European Union, Mr. Olivier de France affirmed that ”indifference” is the biggest threat. 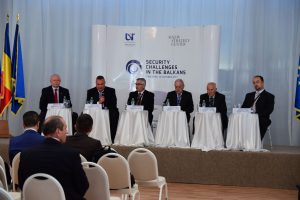 It was mentioned by Mr. Arian Starova that the Western Balkans need a balanced attention from NATO and the global actors and one of the challenges that the Balkans face is the hybrid threat. As Mr. Vincenzo Camporini mentioned, what is going on in the Balkans is vital for the security of the entire Europe. It was stated by Mr. Nicolae Ciucă that the NATO allies are committed to find the adequate means capable to enhance regional stability. In this regard, Mr. Sandro Knezovic says that the unpredictability of the Balkans could be the only predictable aspect.

* A selection of pictures is available in ‘Photo/video’ section.

This website uses cookies to improve your experience while you navigate through the website. Out of these cookies, the cookies that are categorized as necessary are stored on your browser as they are essential for the working of basic functionalities of the website. We also use third-party cookies that help us analyze and understand how you use this website. These cookies will be stored in your browser only with your consent. You also have the option to opt-out of these cookies.
Necessary Always Enabled

Any cookies that may not be particularly necessary for the website to function and is used specifically to collect user personal data via analytics, ads, other embedded contents are termed as non-necessary cookies. It is mandatory to procure user consent prior to running these cookies on your website.